It has been an interesting week. Tuesday my newspaper had an article on the (in)famous Yves Klein Blue. But the printed color was purple… Later this week, I noticed some images with better conversions, but with others, it was the same issue again. When it comes to converting blue from RGB to certain CMYK-profiles – especially newspaper, but also uncoated paper can be an issue – ICC-based color management can – still – go wrong.

For the record: I do read my newspaper on paper. Otherwise, it would just be news. I like the look and feel, plus research has shown that our brain processes information on paper differently from information on a screen, with a longer lasting memory as one of the effects. (a tip: if you really want to remember my words: do print this article, if you don’t want to remember them: keep on reading on your screen!)

So, when having breakfast and reading the newspaper – yes, I can multitask – I saw the article on Yves Klein Blue. But this didn’t exactly look like the color I remembered. OK, with artists you never know, so a specific blue might actually be purple for color geeks, so I checked the online version. And I can assure you: Yves Klein Blue is really blue. 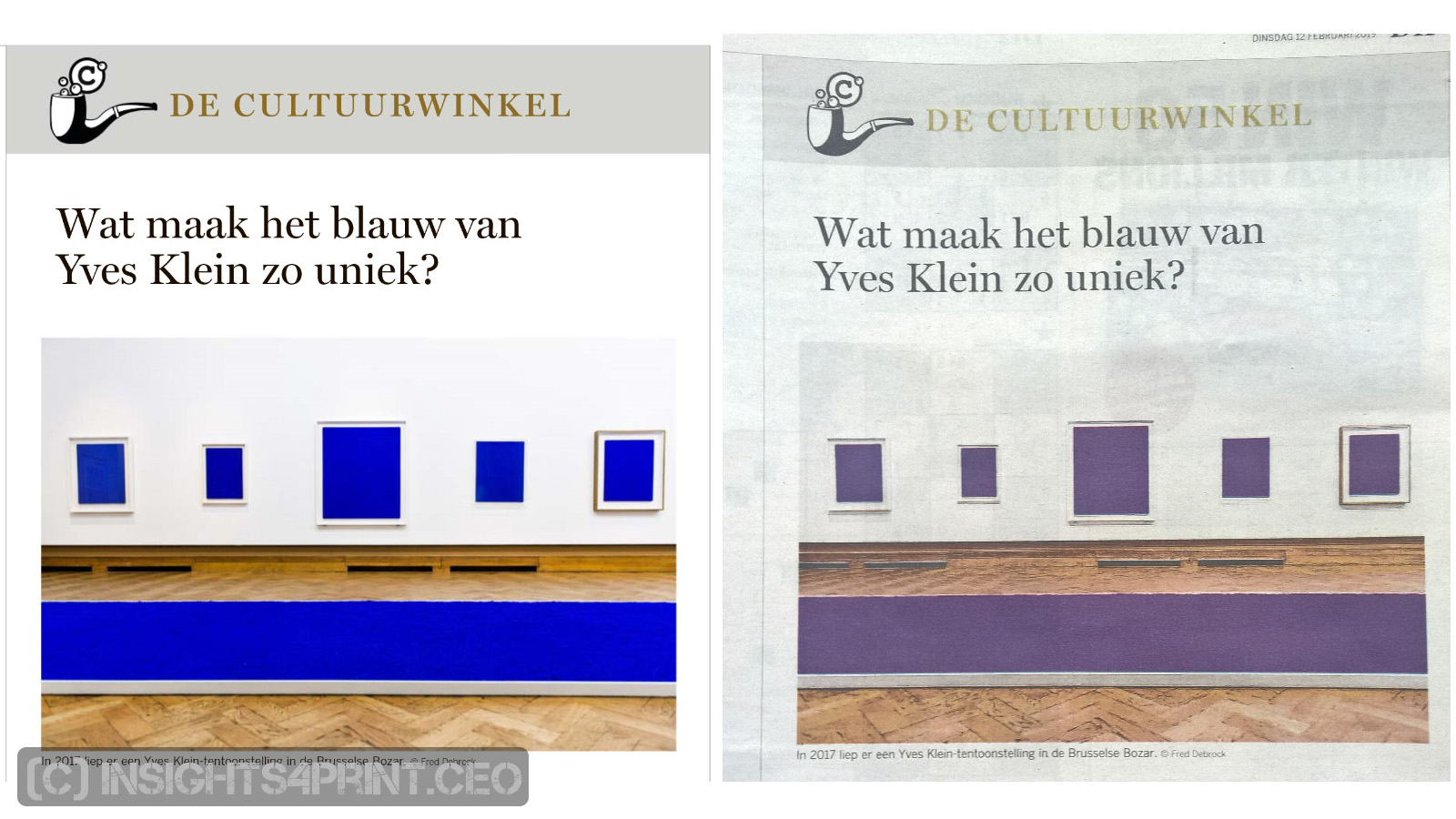 If you read my introduction to color management, you will probably ask what happened? Isn’t ICC color management perfect? Well, no: it isn’t. And the blue to purple conversion is one of the nitty gritty details that I didn’t share in the color management article, since I didn’t want to confuse people.

Color can be something quite complex and at the time when the development of ICC color management started (1993, with the launch of the first v2 profiles in 1994), both memory and processing power were rather limited. Especially compared with today. So, I assume that with today’s capabilities, clever color scientists could solve the issue, using more complicated profiles and algorithms for the conversion.

But then comes the next problem: implementing the new solution. That can take some time… As an example: do you use JPEG2000 or the original – and more limited – JPEG file format for your photos? Yep, you need a ‘killer application’ to get people moving. And a small, incremental improvement, to get from 90% to 99%, often isn’t enough.

Back to the interesting week. On Wednesday, I noticed an article with a Banksy mural painting that contained the European flag. And it was kind of blue! I hoped that the clever color scientists had already fixed the issue (I did try to pull some strings), but when looking at the digital version, it was quite clear that the flag wasn’t the deep blue the ‘real’ flag has, but a lighter blue/cyan.

And today there were many examples in the newspaper: on page 2 and 3 an illustration with – again – the European flag. And here – again – the blue to purple conversion. 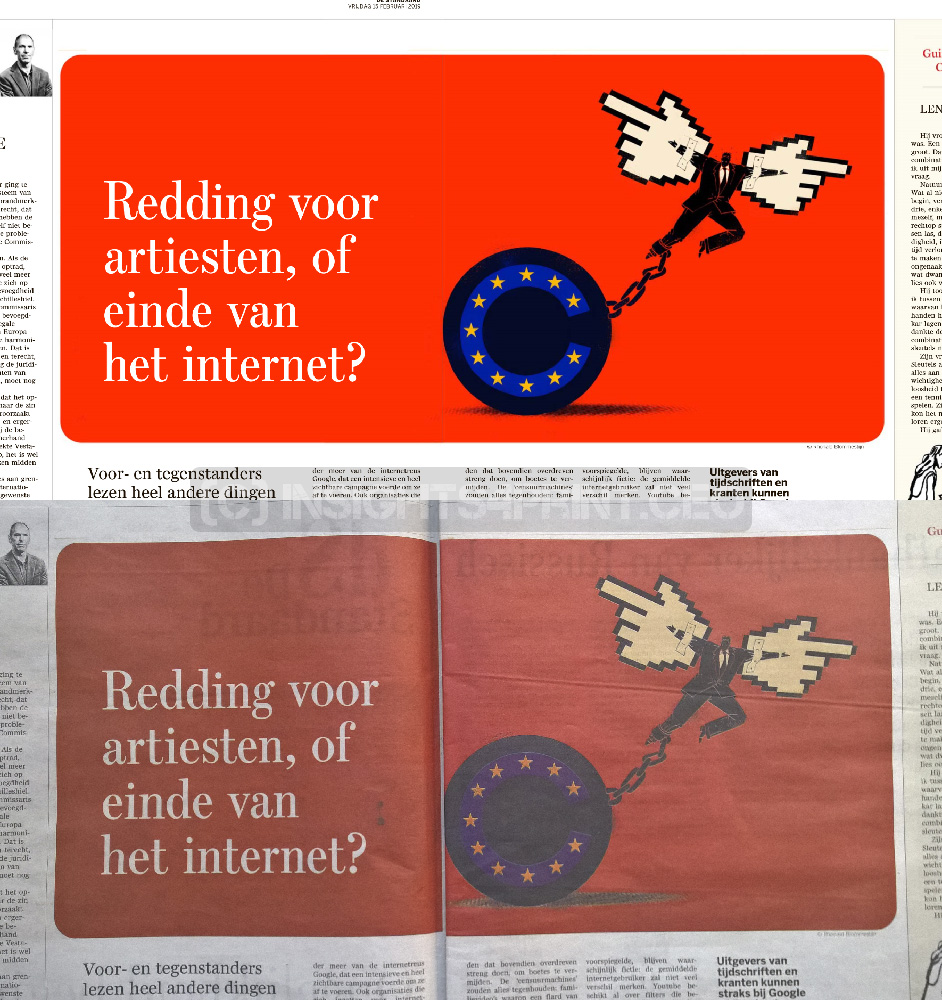 A bit further in the newspaper, there was a picture of a few people with a lot of blue in it. And this stayed blue! Hurray!

But at the last page, once again the European colors, in an illustration, and again the blue to purple conversion. 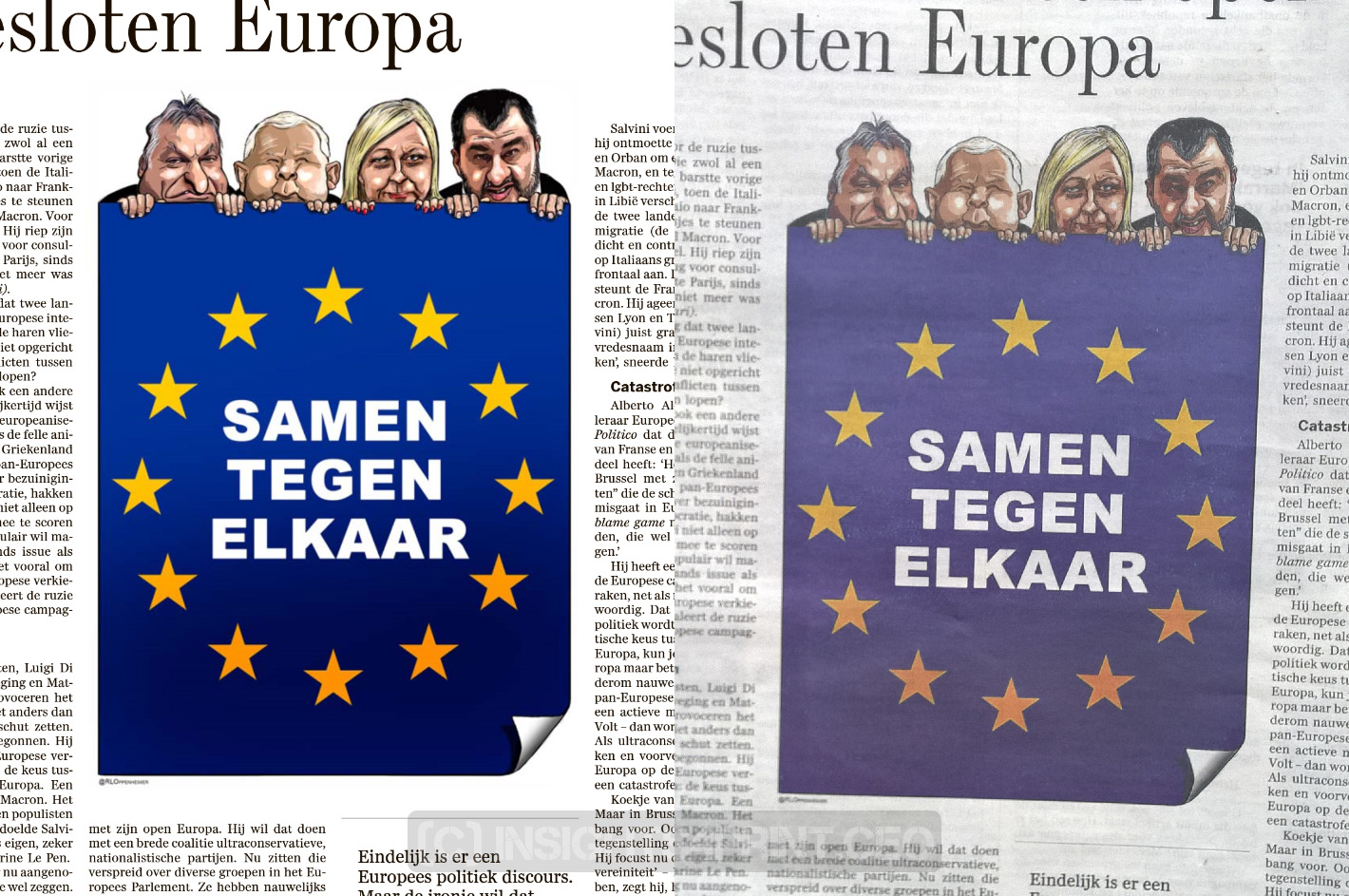 Why is this important?
ICC color management is a very useful tool, it has improved color conversions significantly. But it still has some flaws, with the blue to purple conversion as one of the most visible ones. The ICC consortium is working on a newer version, but at this moment I don’t know if this will fix the blue to purple issue. And if it does: will companies implement the newer and better solution? Remember the JPEG2000 example…

PS: John – the Math Guy – Seymour has an interesting article on Yves Klein blue. Check it out!

UPDATE 26/04/2020: also with coated papers, the blue-to-purple conversion still exists, as shown in this article.

(Visited 1,015 times, 1 visits today)
About Eddy Hagen 118 Articles
The printing industry has changed significantly over the last few decades. And that change isn't over yet. Eddy Hagen has been observing all these changes from a front row seat, since 1988. He has seen and debunked hypes that still don't deliver. He has seen and promoted small evolutions that had a big impact. He has connected the dots to get a better view. He is an independent mind who might be able to give you unique insights in the world of print and innovation.
Website Twitter