It’s a fact: the internet, digital, social have grown significantly over the last years and are taking more and more of our time. Marketing money has followed that movement towards digital. But was that unconditional shift of marketing money to digital a good idea? Probably not. There are other, lesser known facts. Printed ads are trusted much more than digital ads, the influence of ads on social media is very low. And direct mail significantly outperforms digital.

CONTENTS: Huge user numbers, but limited influence on buying | Trust in advertising | Gen X, Y and Z are different. NOT! | The multichannel newspapers: mostly paper | Direct mail outperforms all digital channels, by far | Cross channel much more valuable if print is included | Why is this important? | PS: The decline of newspapers: lesser known facts | Updates

First some numbers on the size of social media. And these numbers are huge, even gigantic. Facebook is close to 2 billion users worldwide (1,871 billion) according to the latest figures from Statista. Instagram has 600 million users, Tumblr 550 million, Twitter 317 million.

Huge user numbers, but limited influence on buying
Looking at the numbers, you might think that’s the place to be for marketing and advertising. So let’s dig a bit deeper. A recent study by SUMO Heavy Industries with 1003 respondents on ‘social commerce’ shows that 72% uses social media on a daily basis, 47% multiple times per day, only 11% never uses social media. Asked why they go on social media, 24% said they used it also to look for specific information on products and services. And even 42,27% said they have already purchased something they saw on social media (please note: if they did this one time in their lifetime, the answer is yes; this is not a guarantee they do it on a regular basis).

But it’s not all that positive: only 3,09% says that social media has a significant influence on their purchase decisions, 42,17% somewhat. More than half absolutely none.

When asked what influences them in their purchase decision, advertisements and sponsored posts are the lowest two in the list: 12,06% and 15,55%. Much more influential are likes by friends/family: 30,81%; product reviews/news: 53,14% and posts by friends/family: 53,24%. 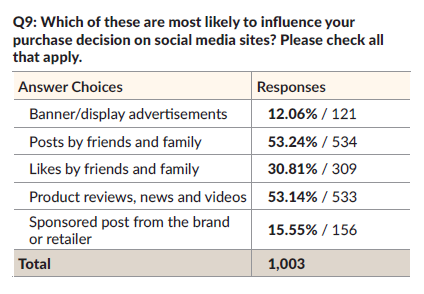 So it seems that all those marketing efforts on social media only have a limited influence on the buying decision of social media users.

Trust in advertising
In January eMarketer.com published figures from a study in Germany, which surveyed the ‘trust’ of people in multiple information sources. Ads in newspapers and magazines had a much higher trust rate (54%) than advertising on websites (16%). 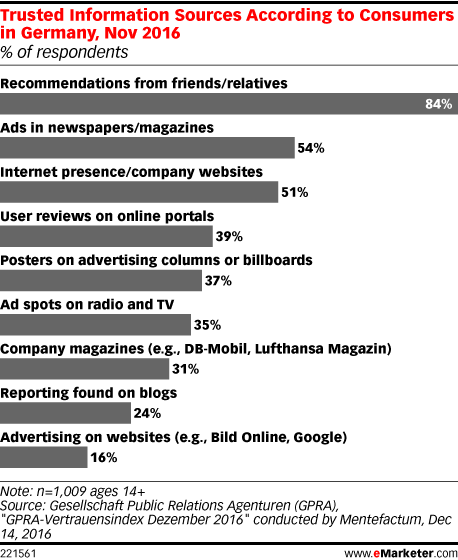 Another study published by eMarketer.com, about users in the USA, also show a big difference between printed ads, printed marketing material versus digital ads, sponsored content.

The multichannel newspapers: mostly paper
A few weeks ago The Nielsen Company also published a report about newspaper readership in the USA. And it shows some interesting facts. First of all: nearly 170 million Americans read a newspaper in the last month. And 81% of them read the printed version… 51% read exclusively the print edition, the others combined print and digital (web and/or mobile). ‘Digital only’ accounts for 19% of the readership.

Please note that in many studies about newspaper readership, the question is ‘what is your primary news source’. Which can only be one. And since speed is relevant in the world of news, many people will say it is the web/mobile. Including me, although I love to read the paper version every morning at breakfast. I’m a typical print/web/mobile newsreader. The Nielsen study asked for all the media usages, which offers a much better perspective on the real world. Not a biased one. 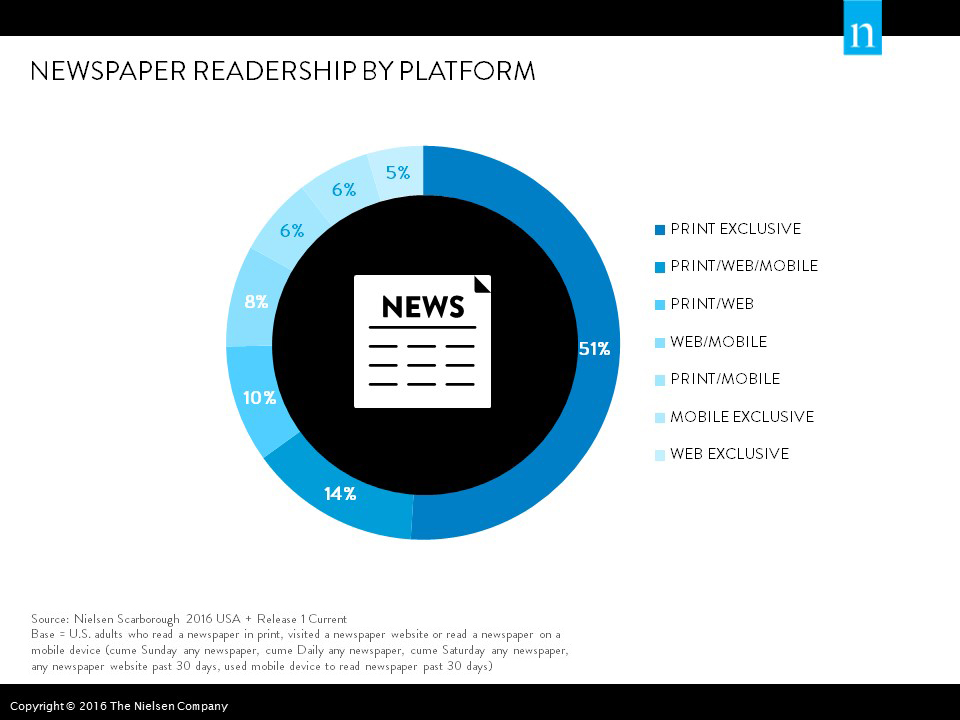 Cross channel much more valuable if print is included
The numbers by The DMA clearly show that cross channel is much more valuable if print is included. You need to take print serious when developing a cross channel marketing strategy. And in case you think you can’t connect print to your reporting system, check this step-by-step tutorial showing you how you can print into Google Analytics. It’s really a piece of cake. And one that delivers.

Why is this important?
Marketing budgets have been shifting significantly towards digital, because that’s where the action is. And prognoses for the future show that shift will continue. Cross channel marketing usually only focusses on digital, because it seems easier. But the reality is that people put less trust in digital, the influence of digital is lower, the response rate of digital is (much) lower. Cross channel marketing is only valuable if print is included. We all should point this out to the marketing community! Share this info! Right now!

PS: the decline of newspapers, some lesser known facts
One more thing… The decline of newspapers in the USA has been attributed to the rise of digital, the rise of free content. But that’s not completely true… In the USA the business model of newspapers was largely dependent on advertising. And early 2000’s there was a significant shift in one specific kind of advertising: the (highly profitable) classifieds. That’s when Craigslist started, offering free online classifieds. And Craigslist captured a gigantic portion of the – paid – classifieds from newspapers. The effect of Craigslist on advertising in newspapers has been studied by two business professors from Harvard (Robert Seamans and Feng Zhu). You can download the paper here. 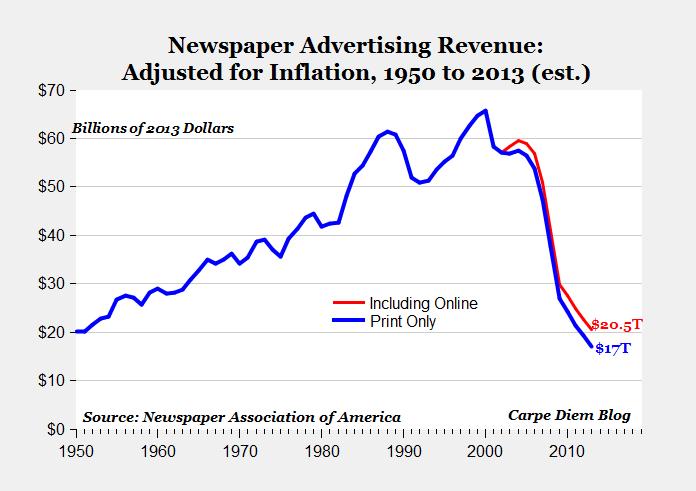 And a personal observation: the decline of free newspapers in hotels. Which might sound anecdotal, but the numbers could be significant. I started traveling to the USA for my job in 1999. In those days there would be a free newspaper in front of every door in the hotel, every morning. Every room, no matter if it was occupied or not. A few years later (2004 or 2005?), this started changing: newspapers were only delivered to rooms that were occupied. And by 2010, I guess, the newspapers were not delivered to the rooms anymore, you could find them on a table on every floor, next to the elevators. And short after that, you had to start looking for them… Usually there was a pile next to the breakfast room or in the lobby. And in some hotels you had to specifically ask for a free newspaper upon check in, otherwise you wouldn’t get one. This may seem irrelevant, but do you know how many hotel rooms there are in the USA? According to this article, it reached 5 million rooms in 2015, up from 4,5 million in 2008. That’s a significant amount of rooms. If a free newspaper was general practice in all or most of them, that’s a really significant number of newspapers…

UPDATE 20/02/2017: if you want more numbers on how direct and email compare, here is an interesting infographic with the ‘ultimate factsheet’ on direct mail vs email.

In his article he mentions two studies to prove his point. The one from McKinsey&Company dates from July 2015, in the world of social media, that’s quite old. The other one by Gartner is more recent, but it focuses on where ‘social marketers’ will invest in the near future… Based on the information available in the press release it does not show that paid ads on social media are effective… And there can be discrepancies between the views of marketers and customers: check this article about why people subscribe to a marketing newsletter and more specifically the chart. Subscribing to marketing newsletters is all about free stuff and discounts…

UPDATE 26/02/2017: Cadent Consulting Group just released an interesting study about CPG marketing (consumer packaged goods). It shows that digital ads surpassed traditional ads. But more importantly: they did not only survey CPG marketers, they also surveyed retailers and consumers. And guess what: both retailers and consumers are not (really) convinced that digital ads work. Of the consumers interviewed, only 14% were aware of digital ads, only 10% said they were influenced by them.

UPDATE 30/03/2017: I just came across the Magazine Media Factbook. That one is full of evidence that print advertising works…

(Visited 11,015 times, 1 visits today)
About Eddy Hagen 118 Articles
The printing industry has changed significantly over the last few decades. And that change isn't over yet. Eddy Hagen has been observing all these changes from a front row seat, since 1988. He has seen and debunked hypes that still don't deliver. He has seen and promoted small evolutions that had a big impact. He has connected the dots to get a better view. He is an independent mind who might be able to give you unique insights in the world of print and innovation.
Website Twitter