JPEG was released 30 years ago. Although we have seen many competitors that were either more efficient or offered higher quality, or both, JPEG is still the dominant file format for pictures. One could wonder why. And this question relates to something bigger: when will new standards become mainstream? E.g., standards like CxF, ICCmax, PDF2.0, …

CONTENTS: Blinded by opportunities | iccMAX and CxF | CxF: the missing element | Everything in place | Why is this important?

Some (or many) techies love new technologies and are often blinded by the opportunities of these new technologies. But they forget that to be successful, a new technology, a new standard needs to be implemented. You can have great concepts and technologies, but what’s the use if nobody is using them? Having watched the evolutions in the printing industry since 1988, the list of great technologies that were forgotten is long. One of my favorites: the color engine that was supposed to be included in Windows Vista… That could have had a significant impact, but due to budget cuts, it was abandoned.

iccMAX and CxF
But let’s take a closer look at two color-related standards: the ‘old’ CxF (released 2000) and the ‘new’ ICCmax (ISO-standard published in 2019). Last year ICCmax got a lot of attention in my region, some actively promoted it as THE tool for printers that wanted more control over their color reproduction. Which is indeed the promise of that standard. But, there is a big but: when I checked the ICC website, there was no commercial software listed that supports ICCmax… You could download a demo application and command line executables from the GitHub page, but that’s it… So you could use these executables to make a DIY extension to your current workflow, but let’s be honest: would you? With the risk that with each update of your ‘regular’ system, you need to check that it doesn’t break your DIY extension. 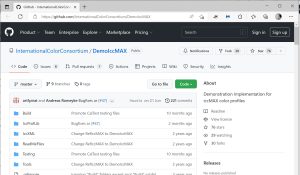 The core specification of iccMAX was approved by the ICC in 2016, the ISO standard was published in 2019. Here you can find the current status of iccMAX.

There is another exciting standard in the color field: CxF, the Color eXchange Format. But that’s a really old one… X-Rite established the first version of CxF in 2000! And by 2015, it became an ISO standard. CxF does already have a use in specific workflows, especially packaging. If I’m not mistaken, it’s the underlying technology of Pantone LIVE (please correct me if I’m wrong!). But in commercial printing and general design, we don’t see it that often. Even though it does make sense.

CxF: the missing element
So, what is then the difference with iccMAX? Well, a recent announcement by Adobe: the Adobe PDF Print Engine (APPE) v6 will now offer a ‘spectral brand color feature’, which according to this blog post enables “full color management for corporate spot colors defined by spectral values, not swatches or names”.  Or in other words: it will support CxF (although I could not find a literal reference to that support, but just the description of what will be achieved and knowing Adobe puts a lot of effort in ISO standards, I’m pretty confident it will in some way or form use CxF). 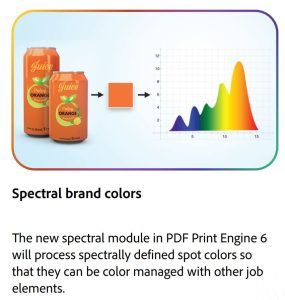 And that support of the PDF Print Engine puts another piece of the puzzle in place. PDF version 2 already supports the use of CxF. Now with the APPE v6 supporting CxF, you can output a PDF with spectral brand colors.

So, let’s think about the next step: introducing CxF in Adobe Illustrator, Photoshop, InDesign… That would be the logical thing to do, the step to complete CxF support for print output. After first fixing the file format, then the output, and as the final stage, the input, everything will be in place for full support of CxF.
And that’s it: for a standard to succeed, you need full support from industry-leading companies that also cover the complete workflow. From start to finish. And it’s a good idea to first prepare the ‘output’ part before starting on the creation side: when done the other way, it will lead to disappointment: “But I created a perfect spectral defined brand color, but the RIP couldn’t handle it!” By the way, it would be a wise step for Adobe to start integrating CxF in the Adobe Creative Cloud at this very moment. The breakup with Pantone offers a vast opportunity for Adobe to introduce a new, spectral-based color library…

Everything in place
As I showed, to be successful, every element of the puzzle needs to be in place. And to show another example, let’s return to the 30th anniversary of JPEG. At that time, it was a breakthrough. But as time went by, there were a lot of competing technologies that were more interesting. Even the ‘newer’ versions of JPEG (wavelet base JPEG2000 and JPEG HR), or others like HEIC, haven’t replaced JPEG. It’s still a dominant picture format on the internet 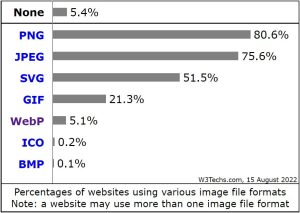 Why is this important?
Technology evolves, standards evolve, and as a company, you do not want to lag behind. But you also do not want to invest in something that isn’t ready yet. Only when the most important pieces of the puzzle are in place, will a technology or standard become mainstream.

In some areas, niches, being ahead of the curve might make sense. At this moment, e.g., multiple tools and plugins will support CxF throughout the workflow. If you are in packaging, using these tools and plugins will be an investment worthwhile. For commercial printing, it might be too much of a hassle. But the moment Adobe decides to support CxF all the way, it will be everywhere.