Did you ever wonder what the starting point of innovation is? If you search the internet, you can find all kinds of answers. And although they are not wrong, they are missing the key element, the one element where innovation starts: an observation.
CONTENTS: Innovation in drying your hands | ‘Failed’ experiments, unforeseen side-effects | Why is this important?
Yes, innovation starts with observation. It’s as simple as that. Let me explain this with the evolution of how we dry our hands in a public restroom, in a restaurant. In the old days, there was a towel. Exactly one towel in many cases. The first person had a clean towel, but after four or five people used it, it became wet, and maybe dirty. So that wasn’t a good idea.
Observation: using a towel to dry your hands in a public restroom only works for the first few people using it. Afterward, it becomes wet and dirty.
The next step is the ‘one towel per person’ approach. In a fancy restaurant, that was (and still is) one nice cotton towel per person. But usually, that isn’t feasible. So paper towels were introduced as an innovation to answer that question. But this has an important downside: the supply is finite. If there are no more paper towels, you’re left with wet hands. And paper towels need to be discarded in a decent way, which often is not the case. 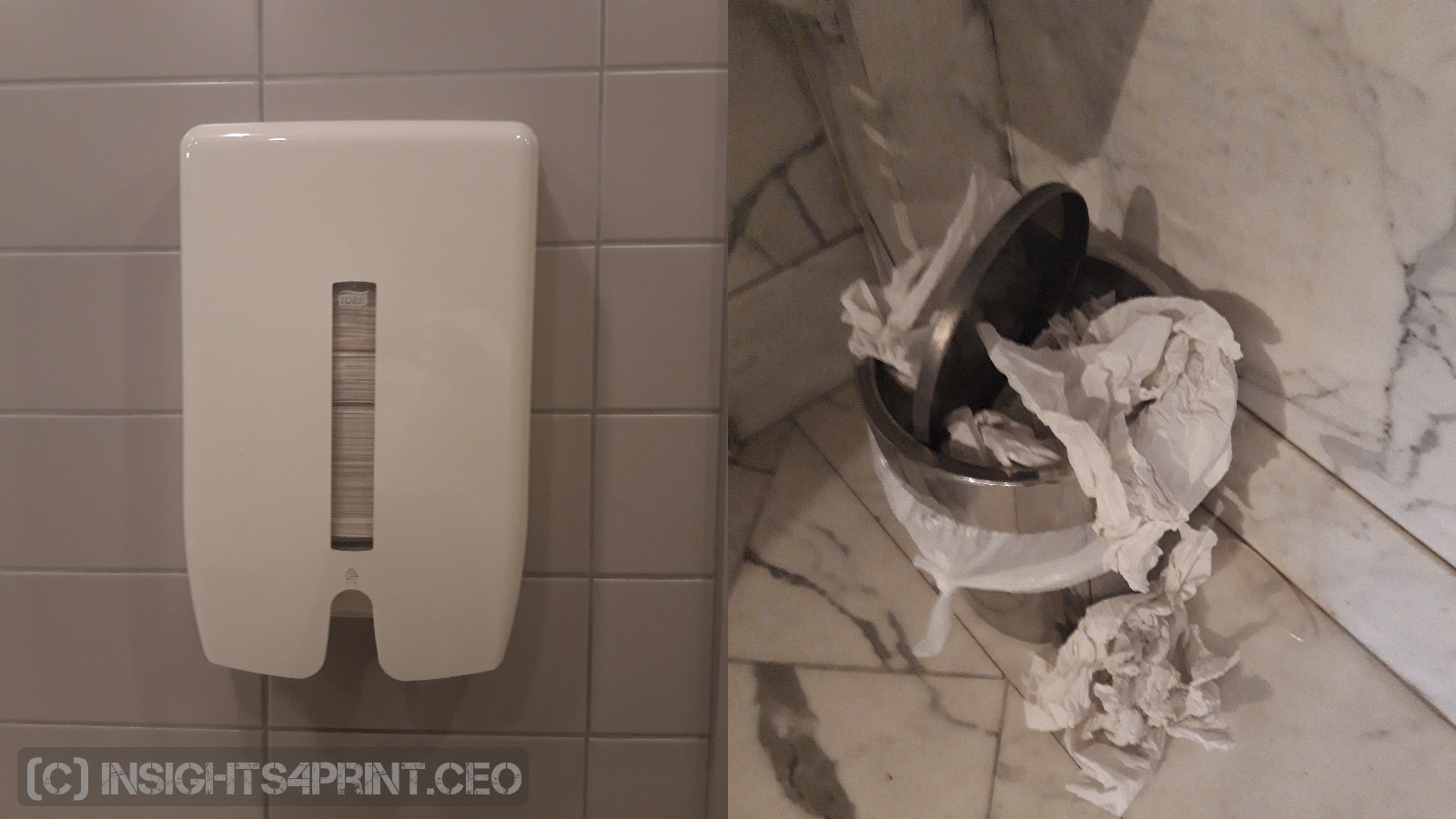 The supply of paper towels is finite. And the disposal often gets messy…

Observation: paper towels are a finite solution, disposal is a mess.
An innovation that solves the bad disposal of paper tissues, is using cotton towel dispensers. There are two different types. The first is one where you always have to pull the towel, the other advances automatically. Often people confuse them and ‘break’ the automatic one, or think the manual one doesn’t work and dry their hands on an already used part of the towel. 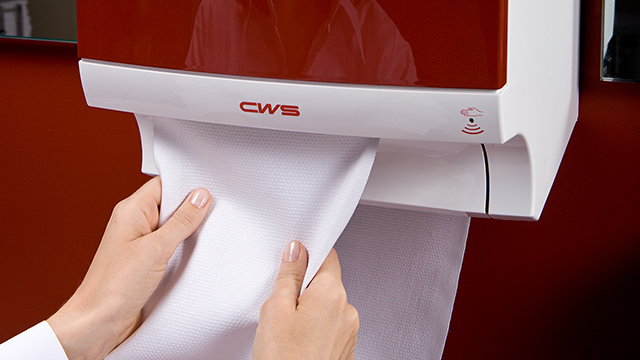 This is one of the two types of cotton towel dispensers by CWS. This is the automatic one, as indicated by the logo on the left.

Observations: cotton towel dispensers are also finite, they are confusing and can be broken.

The ‘infinite’ solution is the air blower, first patented in 1922. Some devices use very hot air, which can be rather uncomfortable (almost burning your skin). Other devices use a powerful stream of air, which blows away drops of water, onto the ground, or onto your clothing. And often people do not know how to use them properly, which is sometimes solved by putting instructions on the devices. Also, it can take a long time before your hands are really dry.
Observations: air blowers can be uncomfortable to use, it sometimes isn’t clear how to use them, drying times can be long.
The next innovation in hand drying, which solved the downsides mentioned above, is the Dyson Airblade. Next to the innovative design, using an ‘air blade’ to wipe the water off your hands in just 10 seconds, it also has clear instructions. While being an innovative solution for all the observations mentioned above, there still are two issues: in a busy restroom, there could be water dripping on to the floor. And in many cases, there is only one dryer for every four or five sinks, which could mean waiting lines… 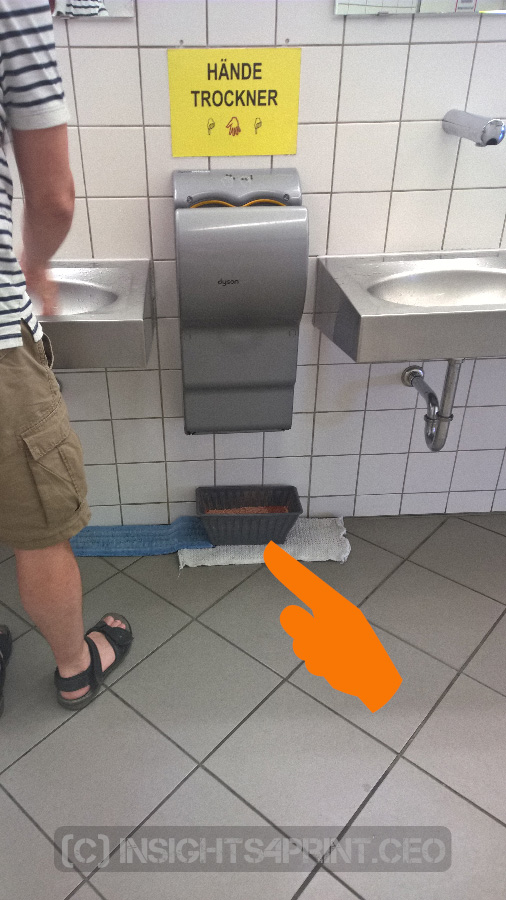 There are both a tray and cloths on the floor to catch the droplets of water from the Airblade.

But the Dyson engineers have found a solution for all these observations: the latest version of the Airblade is integrated into the tap… No more water dripping on to the floor, no more waiting lines. This is the perfect solution: if you can reach the tap to wash your hands, you can also and immediately dry your hands, in a comfortable way (yes, I know this from first-hand experience). 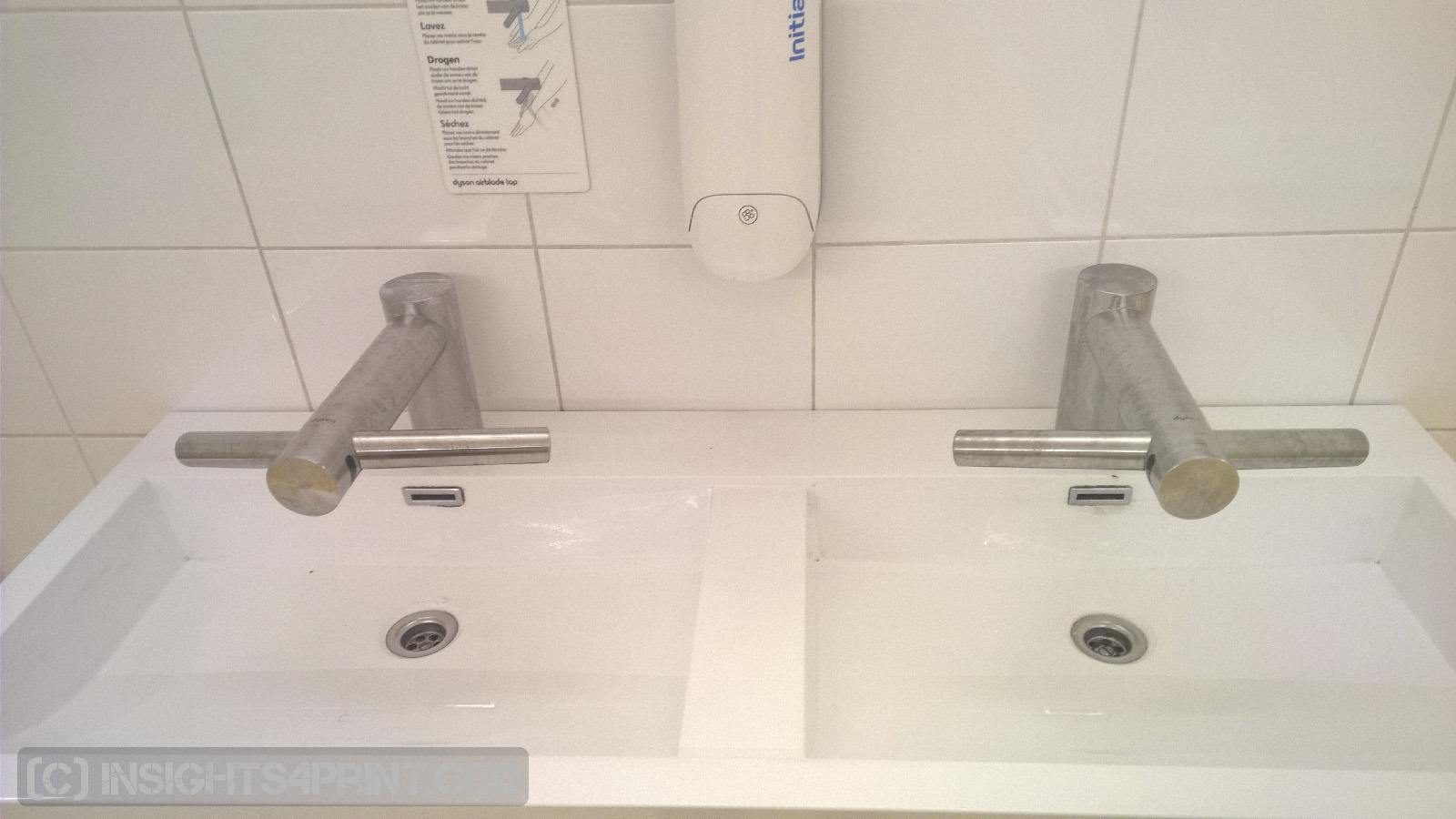 The ultimate hand drying solution: the airblades are integrated into the tap, the air is blown from the ‘wings’ of the tap.

This little history of how we dry our hands clearly shows how observations of current practices have inspired people to come up with new, innovative solutions.
‘Failed’ experiments, unforeseen side-effects
But next to daily life, there is another category where making observations is really important: when doing experiments. There are a lot of stories about failed experiments and unforeseen side-effects of experiments and products that led to successful products.
The best known ‘failed experiment’ is probably Post-It Notes, invented by a 3M scientist. He was trying to design a strong adhesive. But he ended up with one that would only stick very lightly and which could easily be removed, without leaving a stain. At first, this was a failed experiment. Until a fellow-scientist used it to glue bookmarks in his bible and started to writing messages on those bookmarks. And that observation sparked the idea that would eventually revolutionize the way we take small notes.
Another interesting case it the history of Febreze. The inventor, a chemist, was a heavy smoker. And one evening when he returned home, his wife noticed that he didn’t smell like cigarette smoke, so she asked if he had quit smoking. That observation made him go back to all the chemicals he had worked with the day before and this is how he found that a new chemical he had been experimenting with absorbed all kinds of odors.
When talking about side-effects, the best known is probably Viagra. Which was initially a treatment for heart-related chest pain. But it seemed to have a very special side-effect with men…
And recently MIT-researcher noticed in an experiment to grow carbon nanotubes on electrically conductive materials to boost the electrical and thermal properties of those materials, that one of these materials became very, very black. When measured, it turned out they accidently created the blackest black: 99,995% of the light gets absorbed, which is even darker than the famous Vantablack. In some very specific uses, like telescopes, this kind of black is very useful.
Why is this important?
Innovation is on the agenda of every CEO, every manager. But where do you start? You can find all kinds of complex theories on this, but it is really simple: innovation starts with observation.
Look around you! Listen to people! See how people behave! And notice where things aren’t optimal yet, where things can be improved.
And when something goes wrong in an experiment, when an experiment doesn’t deliver the expected output, ask yourself: how can I use what I just observed? This is your starting point for an innovation.
PS: here is a list of 30 well known and successful inventions that were discovered by accident.
(Visited 84 times, 1 visits today)
Like it? Share it! Right now!

Be the first to comment on "Innovation begins with… (no, not with an idea, nor with an invention)"

17 hours ago
Microsoft announced it's bringing 'Defender Advanced Threat Protection' to #iOS and #Android, fixing "a problem that Apple and Google can't seem to resolve." https://t.co/0ZMbBJfKsO And as of today, Defender is also available for #Linux. #cybersecurity #malware
5 1
2 days ago
@RoselleEbarle Thanks Roselle! Glad you liked it! And yes: when used correctly QR-codes can be a powerful tool.
3 days ago
Politicians and other public figures should be forbidden to wear blue suits! That nice blue can become something very different when printed on newspaper stock... Look at this one! #color #print https://t.co/S7yGYt54MD 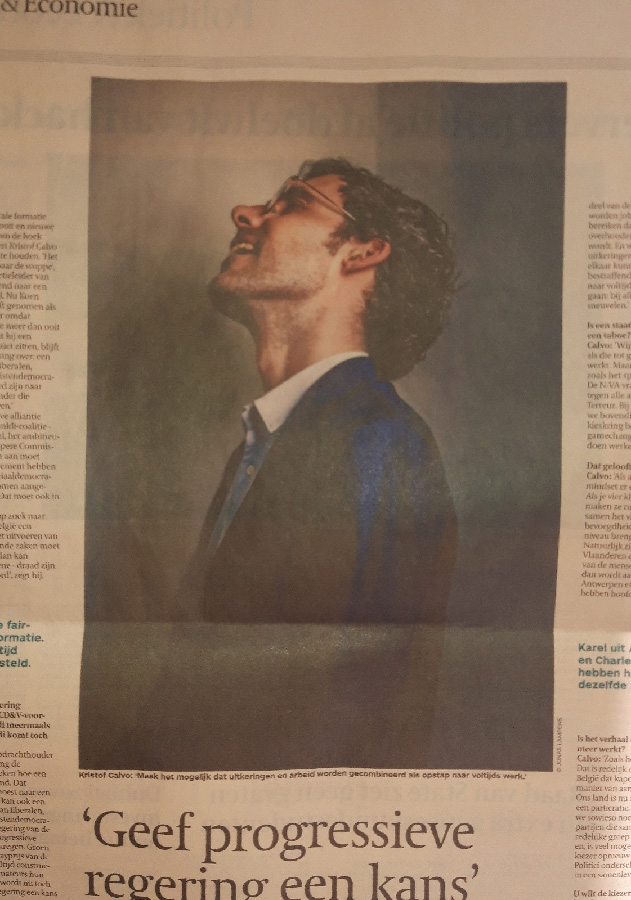