“Printing will never be the same again”, we’ve heard that a lot in the last decade. But essentially, nothing significant has changed. Most printing techniques have advanced, however nothing that I consider revolutionary, not enough to justify that claim, has  been introduced to the market lately. In the past, I have seen several new ideas, from patents and concepts to live demos and even production machines, that could have made the difference, that would have changed the industry significantly. But for some reasons, usually business reasons, these promising technologies didn’t make it.

CONTENTS: Promising technology | Flatjet | DICO Gravure | Why is this important?

If you have been in the printing industry long enough, you might remember Elcorsy. An interesting Canadian company, their ‘elcography’ presses had quite unique features (up to 2m/sec – in 2002,  you can see the patent here). They did make it to drupa a few times, but their booth was rather small and not at the best spot. Although the technology was interesting, they seemed to lack the budget to invest in massive marketing. But it’s not about Elcorsy I want to talk, there were even much more exciting developments…

Flatjet: inkjet, with needles
The first one, a working prototype that I saw with my own eyes, is Flatjet. I forgot the exact year, but it must have been the early 2000’s. The innovation office from the Flemish government (then IWT, now VLAIO) contacted me to go on a trip to Budapest, to see a new printing technique. The company was looking for partners, and maybe I could help.

The inventor picked us up in a hotel in Budapest, and we drove into the city’s outskirts. In an old shed (or garage box), he showed us his invention. It was a relatively simple version of inkjet: he had soldered piezo elements onto a needle (syringe) and when the needle vibrated, a droplet was generated. Kind of like when you hit a fountain pen with your finger: a few drops will come off. But in this case, in a very controlled fashion. 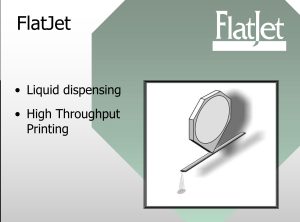 What was remarkable was the speed: he claimed a speed up to 1 to 1,5 linear meters per second. The demo I got was slower, but it was much faster than inkjet. And even more remarkable: the system used regular flexo or gravure inks… The quality wasn’t really high-end, but with that speed, it could have made a mark in large format printing. BTW: part of the quality issue was the alignment of the needles… He had done everything by hand!

Eventually, he decided not to go for a large partner with sufficient R&D and sales power. There was a cooperation with Zimmer, which implemented it in their Chromatex textile printer.

For more information, take a look at their original presentation.

DICO Gravure
No, this is not a mistake: I’m going to tell you about DICO Gravure, the brother of DICO Web (which you may have seen at drupa, long time ago). Both DICO Web and DICO Gravure were developments by MAN Roland, inventions by dr. Josef Schneider. DICO Web was a web offset press, with a ‘DIgital ChangeOver’: the printing plates could be imaged, and erased, on press. Eventually, they produced 3 DICO Web presses, before stopping further development and production. There was also a DICO Page, a sheetfed offset printing press, but I can’t remember if this was introduced to the market or not.

When I visited the MAN Roland research facilities early 2000’s, to view the development of the DICO Web, I noticed a poster in the lab, showing a ‘DICO Gravure’. Which was so clever by its simplicity: instead of engraving the print image each time in a gravure cylinder, you have an engraved cylinder (you could compare it a bit with an anilox roller), and you fill the holes (whole, or even partially) where you don’t need (the total amount of) ink. Once finished, you wash away the filling, and you start all over again. 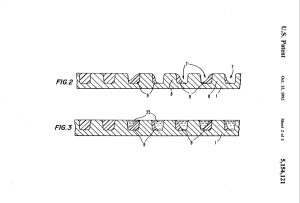 What is so interesting, is that this would make gravure a feasible option for (much) lower run lengths. At that time, gravure usually started from several hundreds of thousands of copies, up to many millions. Imagine that you could use gravure for 10.000 copies! In case you aren’t aware of it: at that time the image quality of gravure was really high, compared to other technologies, it could use cheap paper, and if I’m not mistaken, ink was also cheaper.

But… the market for gravure presses, with only a use case in long run lengths, was relatively small. I guess that must have fuelled the business decision at MAN Roland to stop the project. It could have turned out differently: this kind of technology would have opened up gravure printing to much lower run lengths, to many more print jobs, thus creating a much bigger market for gravure presses. And imagine that the imaging would not be done on press, but offline: you could prepare the cylinders while printing another job.

If you would like to know more about this, the patent is called: “System and method to apply a printing image on a printing machine cylinder having ink accepting receptors or cells, in accordance with electronically furnished image information“.

Why is this important?
Some phrases are used too lightly. But I have seen several technologies that would have changed printing forever. But it’s not just about technology. It is also about business decisions, about having the appropriate resources, both in R&D, financing, marketing and sales.

But that also works in the other way: even with the best financing, marketing and sales, you will eventually fail if the technology isn’t right, if it doesn’t meet users’ needs, or if the quality isn’t a match to competing products.

And if you are looking at new technology: always test, with a job you produce on a regular basis! Always do that! It might prevent disillusions.