Blockchain, it’s probably going to be the most used buzzword in boardrooms this year. According to Gartner’s Hype Cycle, it has just passed the ‘peak of inflated expectations’. And that’s what we see: everyone is talking about it, many are saying it’s going to dramatically change the way we do things. But: after that peak of inflated expectations comes the ‘through of disillusion’… And we are beginning to see the first critical notes. So, let’s take a realistic look at that blockchain. What is it? What can it do for the printing, publishing and packaging industry?

CONTENTS: A lack of Trust | Clever Tricks | Automation | Transparency and Privacy | The Cost | Scalability | Opportunities | Why is this important?

A lack of Trust
The blockchain is all about trust, or to be correct: about the lack of trust in centralized organizations, controlling organisms and authorities. A blockchain wants to get rid of those – distrusted – organisms. And this is done by giving everyone who wants to use that blockchain a complete and unalterable copy of the register (the ledger) of all transactions. So instead of one or a few controlling organisms, the blockchain has multiple, even over a million, controlling individuals or companies. And all of them will check the validity of a block of information, making it quite secure.

Clever tricks
Probably the most important aspect of the blockchain is the fact that it is tamper-evident. You can’t mess with it. Once a transaction is verified and registered in the blockchain, it will stay there the same way, forever. The trick is to use a ‘cryptographic hash’. A hash is a value that is calculated based on the contents and properties of, e.g., a file. In this case, the hash is based on a completed block. The hash value of the block is stored in the next block, this way all blocks are linked to the previous and next one. Therefore: the chain of blocks, the blockchain.

All transactions are also signed via a digital signature, which is linked to a digital name. That digital name can be different from the real name, that’s why Bitcoin (the ‘cryptocurrency’ that made blockchain famous) is so popular for illegal activities…

If you would like to change something in an older block, e.g., the amount of money you paid to somebody else, the hash will be different. And this will be noted by all the other ‘nodes’ in the blockchain network because they have another (the unaltered) hash. And since the blockchain is ‘consensus-based’, the majority is saying what the ‘right’ hash, the right block content is.

The blockchain network is a peer-to-peer network: it’s completely decentralized. It can be an open network, an open blockchain, like Bitcoin. But it can also be a closed network, where only people or companies that are invited to join are part of the network, the blockchain. This could, e.g. be the case in industrial applications of the blockchain.

A really simple overview of the main blockchain concepts can be found in this blog article by Alexey Malanov from Kaspersky Labs.

Automation
Now that we have that distributed and controlled register with all transactions in, e.g. a certain business setting, we can also do some automation. And that’s where many companies are looking at: automation via blockchain, cutting manual transactions via ‘smart contracts’ that are automatically executed. Many of the articles I read in preparation for this article claim that this will save time and costs while reducing risks. And that it will enable businesses to build new revenue streams to interact with clients.

And here is my first critical note: is this claim about saving time and costs not the benefit of automation as such? Didn’t we see the same claims over a decade ago with the advent of XML (and specifically for the printing industry: JDF)? You can also automate without blockchain… It may not look as hip, but it can.

In the case of Bitcoin, you can use a pseudonym for your transactions (the digital name), but all your transactions will be visible, all of them will be linked to that digital name. And sooner or later, somebody – or some organization – will find out your real name. So, as far as I can see, blockchain is no guarantee of privacy.

The cost
The promise is that the blockchain will save costs: you cut out the controller. But that’s only part of the story… Since every participant of the blockchain will need to validate transactions and hold a copy of the complete blockchain, that will come at a cost. And adding up all those costs might exceed the cost of a controlling organism, maybe even significantly. Remember: those controlling organism were once created to save costs…

And to give you an idea about the size of that copy that every participant has to hold: the Bitcoin blockchain has passed 150 GB! Another one, Ethereum, has passed 330 GB and is growing very fast. Both had over 1 million active addresses at the top of their popularity. So over 1 million users had a copy of that huge file… 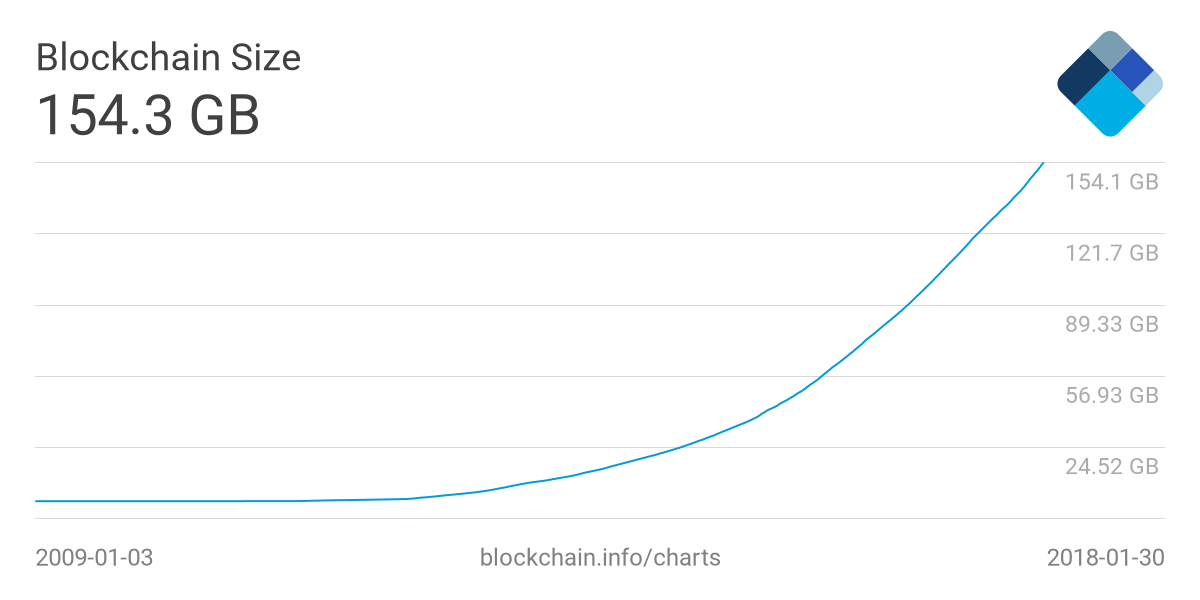 And with that, we come to another cost: the environmental cost. Since all members of the blockchain participate in the ‘validation’ of transactions, all have to process the same algorithms. All 1 million users. According to some calculations, the Bitcoin blockchain consumes as much energy as Denmark. Late 2017 the energy needed to mine one new bitcoin exceeded the average power consumption of a house during one week… 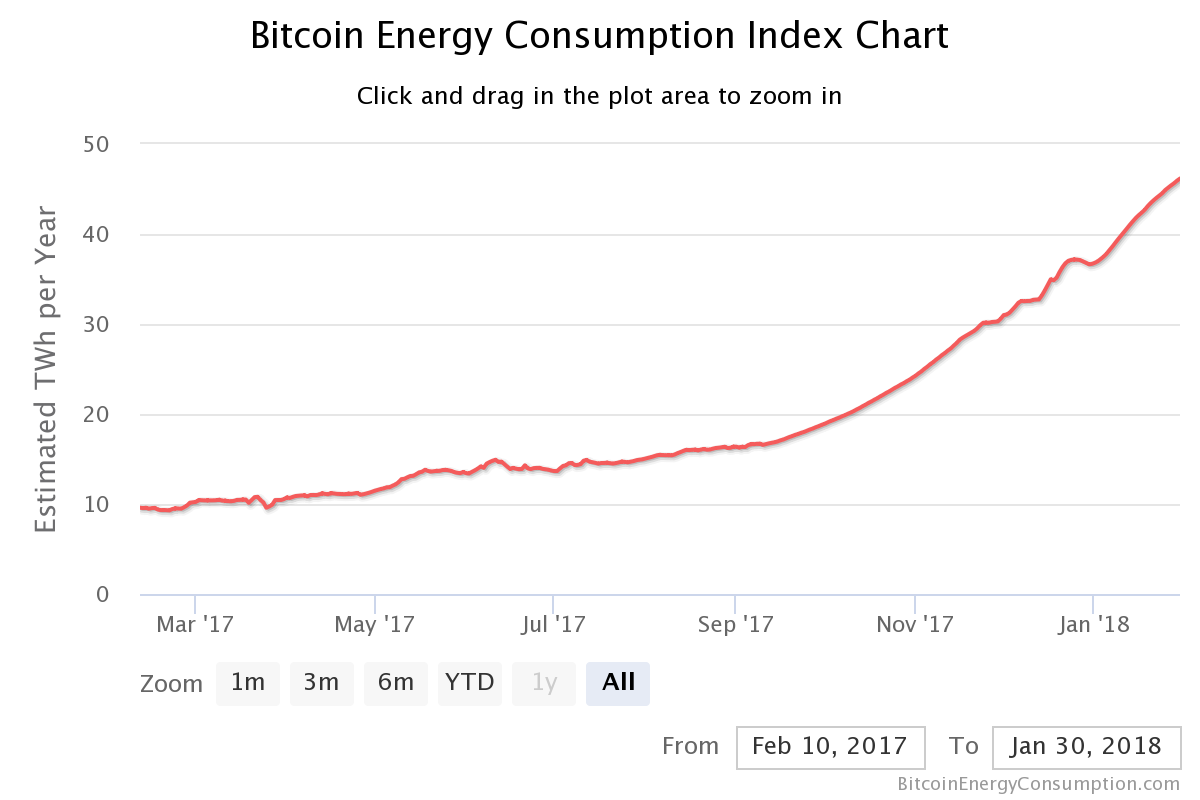 Scalability
There are even people questioning whether large blockchains like Bitcoin and Ethereum will be sustainable in the long term: file sizes, processing power and network speeds needed will only grow. The easy answer of believers is: Moore’s Law! But too many people are not aware of the fact that Moore’s Law is ending… And it’s ending in the not so far future.

Moore’s Law states that the number of transistors doubles about every two years (therefore doubling processing power). But these transistors are already very small, in the ‘state of the art’ implementations only a few atoms wide… Reducing the size of transistors will come to a stop. Maybe there will be a solution to this problem. Maybe not.

And to give you an idea about how scalable blockchain should be if it wants to take over a part of the financial system: in 2016 Bitcoin had 3 to 4 transactions per second, Ethereum had 20, PayPal 193, VISA 1667… And in tests, VISA got up to 56000 transactions per second. (source) And VISA is only one part of the complete financial system. This article talks about these issues.

Opportunities in printing, publishing, packaging
I hope you didn’t jump right to this part: it is essential to read all previous paragraphs to get a realistic look at the blockchain.

So, let’s take a look at my primary focus: printing, publishing and packaging. Over the last months, I’ve read some articles about possibilities. E.g., the use of blockchain in advertising, or how the Internet of Things requires advertisers to use blockchain (yes, two buzzwords for the price of one!). Some people are wild about it, but please read these articles with the information I just shared with you in mind!

An interesting introduction recently was the launch of Kodak’s blockchain based image rights management platform, KodakOne. They also launched their own cryptocurrency for that application, KodakCoin, including ‘mining devices’. Although it had a significant impact on their stock price (it jumped from 3 to 10 US $ in just a few days, and it still is around 9 US $), the cryptocurrency and mining devices are ‘over the top’ in my opinion. The image rights management platform, however, might be interesting. If enough parties will join that blockchain. 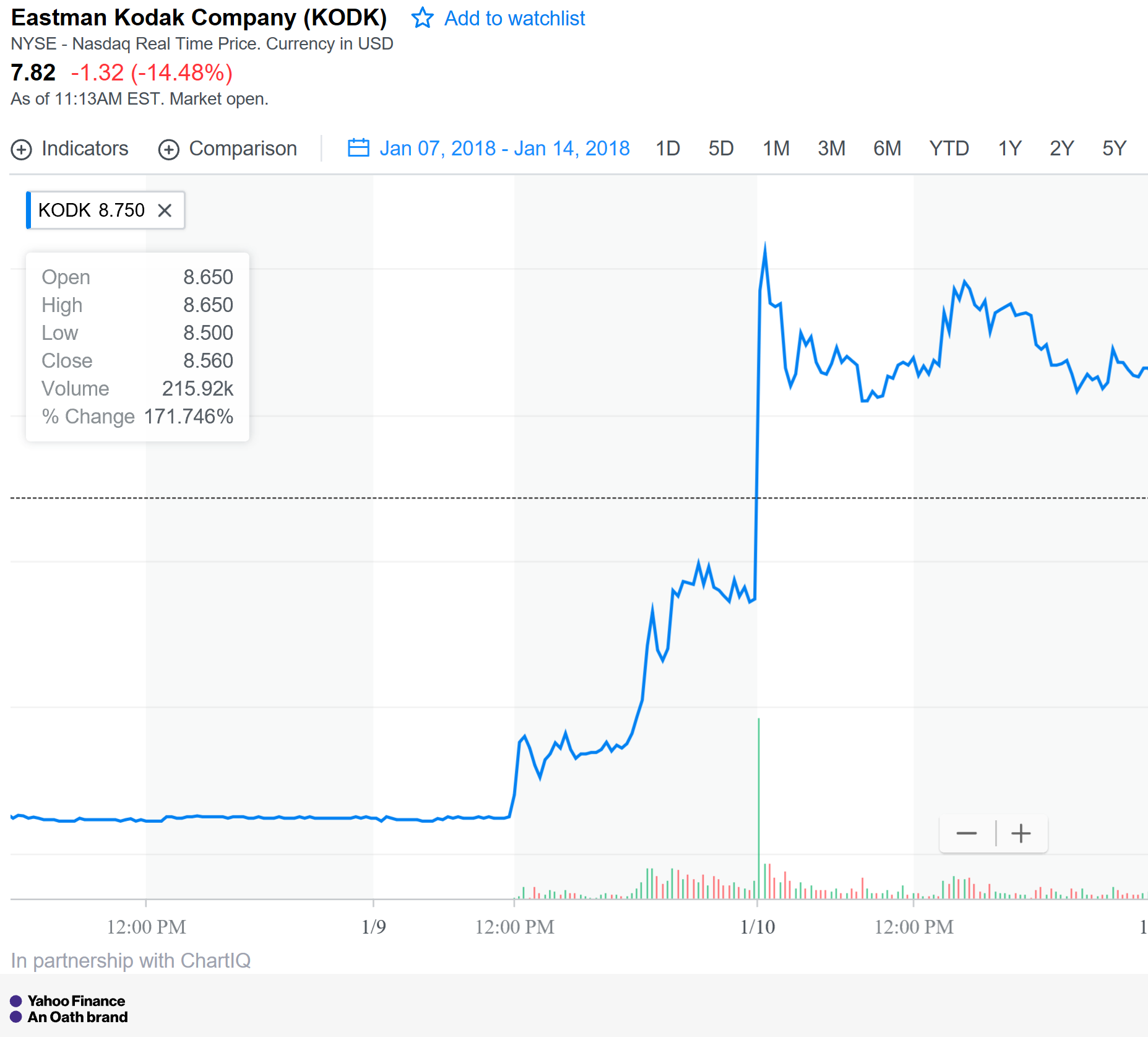 Since traceability is a key aspect, I guess there might be an opportunity in food packaging. The rules about food packaging are very strict: you can only use certain pigments, certain types of inks. So, if all food packaging printers and their suppliers, their customers would join a food packaging blockchain, those customers could get a complete insight in the production chain. And when a contamination is detected, the source can easily be traced.

This kind of application seems interesting, this could have value. But how are you going to convince two competing ink or pigment manufacturers to be part of the same blockchain? Would they be willing to provide enough transparency without revealing company secrets? That’s an interesting – and necessary – exercise.

Another example for traceability are pharmaceutical leaflets and documentation. There it is fundamental to be able to track all the changes in those documents. With a blockchain, this could be a tamper-evident system.

Why is this important?
The blockchain is a technology that is discussed by many people. All kinds of bold statements are made. But for many of these claims, it will be hard to become a reality. I hope I’ve given you a realistic view of what the blockchain is and give you some ideas what you might be able to do with it. But also what the limitations are. Because that’s the most important aspect when you want to start using new technology like blockchain: be clear on its limitations, don’t be blinded by overoptimistic promises.

PS: I’m not a blockchain expert, but I did consult multiple sources when writing this article.

UPDATE 26/02/2019: here is an interesting article about a number of use cases and why blockchain won’t work there.